Connect and share knowledge within a single location that is structured and easy to search.

The number of new questions is low and falls, I suggest a lighter hand with the close/delete votes

This is how the actual status of the proposal on Area51 looks: 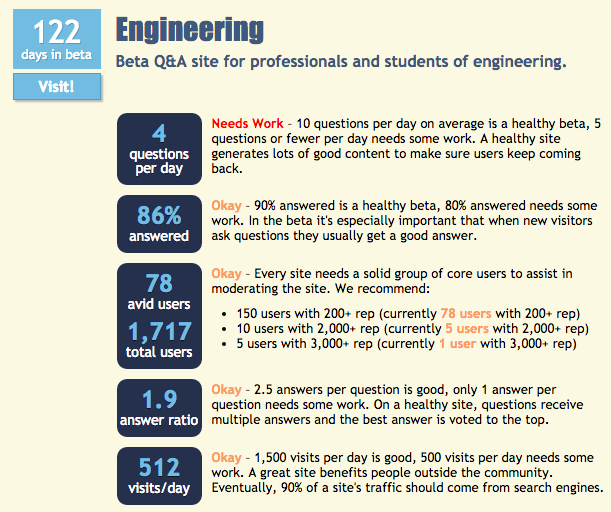 It is significantly better than it looked some weeks ago (there was time when 3 out of the 5 criteria were in "Needs Work" status). This is clearly an improvement.

But the "Questions per Day" criteria of the site is clearly bad, and what makes this worse, earlier it was even over 5.

In my experience, this type of suggestion is often highly unpopular on other meta sites. I am sorry for that.

Concurrently I experience a growing ratio of successful close votes. The probable reason behind that is the growing need to improve the site quality. But please consider: behind these Area51 criteria is a lot of experience of the SE community managers in starting/building up these communities, and this experience is based on statistics which we can't see. And they are doing this as part of their job.

If your moderating/reviewing ideas may have the side-effect of narrowing the scope of the site, my suggestion would be to postpone this at least to when the site leaves its current "public beta" status. I think now a central community should be built up, and it seems that in the current status, we need new members.

My suggestion is to target only the border cases, of course which is unsalvageable crap, and should go. But in the border cases, I suggest to do every alternative before a vote to close. Don't forget: closing somebody's question is a highly unpleasant experience, and in the case of the newbies there is a significant chance that this newbie will be lost. And with it, the site loses not only his actual question, but all of the content he could have created later.

At the end of this road we could even find Beer SE with its 0.1 question/day ratio. Don't do this. Instead of this,

Try to advise the newbie, instead of a silent close vote.

Leaving comments for new users is great; it's a big part of what the first posts review queue is supposed to encourage.

That said, the notice that's left on a closed (or "on hold") question is anything but silent. It's big and loud and designed to advise the newbie and the veteran alike. Sometimes it's better to let the notice speak for itself. According to the community team, closing questions is less likely to alienate new users than ignoring them entirely:

A couple years ago now, we did some analysis of new user retention on Stack Overflow. Some forms of feedback tended to result in folks coming back more than others, but the single biggest way to keep someone away was to just ignore them. Don't vote - up or down. Don't comment. Don't answer. Don't close. Just... ignore. While you're busy walking on eggshells in fear of offending someone, they're seeing a blank page, an empty inbox, and they're walking away.

Here's some more recent data on the topic, including a graph (taken from this answer and cropped for the sake of space) that shows the difference in how likely new users in the sample were to ask a second question based on what happened to their first question: 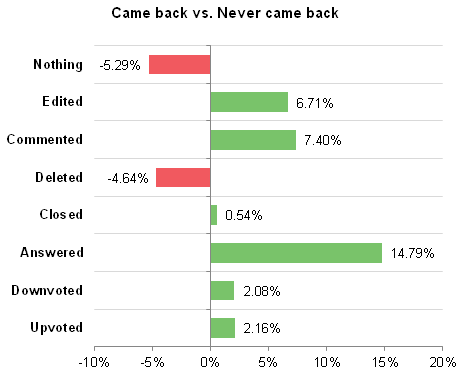 So yes, please don't miss opportunities to leave constructive comments, but know that down- and close-voting also have an overall positive impact on user retention.

Try to edit the question to a salvageable form (I think a highly changed question is still much better than a closed one).

Aggressive edits are always a judgment call, and more of an art than a science in my opinion. Remember to follow the help center editing guidelines and the MSE FAQ articles on privileged edits and suggested edits.

Through the private beta and for a little while after, we were pretty loose with our edits and would try to work miracles on questions that had any potential. That was appropriate at the time because:

We don't have those excuses any more. Now, questions are more often concerned with immediate, practical real-world problems and the author's intent in presenting those problems must be respected. We have a corpus of hundreds of good questions with over a thousand answers, most of them positive-scoring.

Try to forget the stats page and concentrate on what we are building, and why: a resource, to expose solutions in our problem domain and make them less obscure. The point is not to build a community. It's about the content, not the user. Stack Exchange so strongly differentiates Q&A from social networking that feature requests associated with the latter are declined without comment (and staff "sort of hate" them).

By not closing questions that don't fit the site, you are causing long term harm for a short term expedient. In the long run, the people we really want here will find this site less rewarding with more bad questions, or more drivel as some do-gooders attempt (doesn't usually work anyway) to salvage bad questions.

Have patience. The site is still actively evolving. I'd like to see more questions too, but only good questions. Quality is more important than quantity, because in the end it is quality that begets quantity.

Close Vote or Down Vote?

There are really two ways to vote: Vote to Close or Down Vote.

From the perspective of the new user, which is better?

I agree that it isn't immediately obvious to a new user that the question can be reopened, but a conversation in the comments can help.

The problem is that even after a discussion in the comments, the question isn't going to be improved.

Not the answer you're looking for? Browse other questions tagged discussion vote-to-close votes .

This site is for discussion about Engineering Stack Exchange. You must have an account there to participate.

6
When should the moderators rely on the community to close questions?
7
What should our policy be on 'Novel Idea' questions?
1
What is yet needed to leave the beta status?
10
Proposal: Add a custom close reason for homework questions that don't show effort
2
Should we change the title of “Identify this” questions once the answer is known?
6
Should applicable questions be tagged with the requisite code?
0
Why close questions just because they are difficult?
3
How should we deal with “check my idea/implementation” questions?
4
What's Going on With the Buoyancy Question?