Connect and share knowledge within a single location that is structured and easy to search.

I think it is well accepted that sometimes engines produce smoke that looks blue, and I think mechanics who work on engines will confirm this. I included a personal snapshot of smoke that appeared blue to me, and a link to a video. Following a comment, I've even added several links to explanations about what may be happening in an engine to cause "blue smoke", and how to fix the problem.

As I've said in this comment "I have a strong hunch that there are some engineers who work with internal combustion engines make measurements on what is in the exhaust, and may have some insight here."

In this particular case, it seems to me that occasional blue smoke from engines sufficiently common knowledge that the question can at least stand without closing.

There are questions here that mention engine knock or backfireing, yet no acoustic spectral analyses were needed to pre-prove that these happen, before the question was allowed to stand.

Any suggestions how this question could have been asked differently so that it would not have met such resistance? Actually, is there really anything wrong with this question at all, other than the first people to read it didn't know the answer? 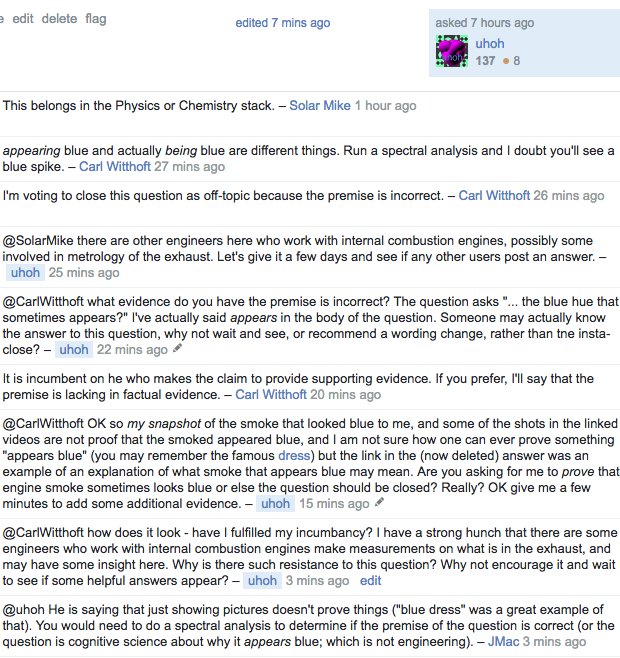 First things first: I've purged the comments and migrated your question to our site for mechanics and DIY enthusiast owners of cars, trucks, and motorcycles (where it may or may not survive—as you have already noticed).

I'm sorry your question has gotten the response that it has; this is not entirely your fault. Experienced users should know that scopes are not exclusive on Stack Exchange; there are many questions that could be on topic on multiple sites and it is the author's prerogative to choose which audience they want to address.

The folks who are arguing with you about whether the smoke is blue are getting hung up on technicalities. It's a thing that engineers are known to do (often for good reason) but it's completely unproductive here. "Blue smoke" is a well-known phenomenon and a response along the lines of "the smoke is not actually blue" belongs in an answer, not in a comment or close-vote.

There are, however, some things you could have done better. Your original question on Chemistry SE was well-received with a net +2 score, despite not attracting much attention. You probably should not have cross-posted to another SE site before making an effort to better promote your original question. You could have offered a bounty on the question, for example. If you wanted to attract attention specifically from engineers, you could have posted a link to your Chemistry SE question in our chat room.

I chose to migrate this question on the off chance that it would be better received on Mechanics SE, where there are already many questions about "blue smoke"—but honestly, I think it works best where you first asked it, and if it's closed there I don't have any plans to reopen it here. I did make a few notable edits beforehand:

You shouldn't have been put on the defensive in the first place; that was uncivil. But in the future you would do well to disengage sooner, or avoid engaging at all, in the comments on your question. Provide what information is useful, clarify if you must—ideally in the problem statement—but avoid chatty, back-and-forth conversation.

Not the answer you're looking for? Browse other questions tagged discussion .

Welcome!
This site is for discussion about Engineering Stack Exchange. You must have an account there to participate.
Help

24
The Engineering.SE position on recommendation/finding stuff questions
18
Our Scope (and Overlaps with Sister Sites)

12
What should our position be on homework-type questions?
8
Is oil engineering on topic?
3
NDQ assessment of laser interferometer question
1
What is yet needed to leave the beta status?
2
Can questions asking for the distinction between two engineering phenomenon be on-topic?
3
A question about professionalism and neurotypical
4
Moderator Election Question: Comments v. Answers
0
2020: a year in moderation